One year on since releasing its Air Quality Strategy and pledging a series of commitments, the Port of Southampton reveals significantly improved average levels of nitrogen dioxide across the port.

Last Summer, and more than one year ahead of Government requirements, the Port of Southampton published an Air Quality Strategy including a package of proposals to accelerate improvements in air quality around the UK’s number one automotive and cruise port.

ABP Southampton along with partners across the port have worked together delivering on air quality commitments and have achieved an average of 30 µg/m3 across the port - far below the UK National objective levels. 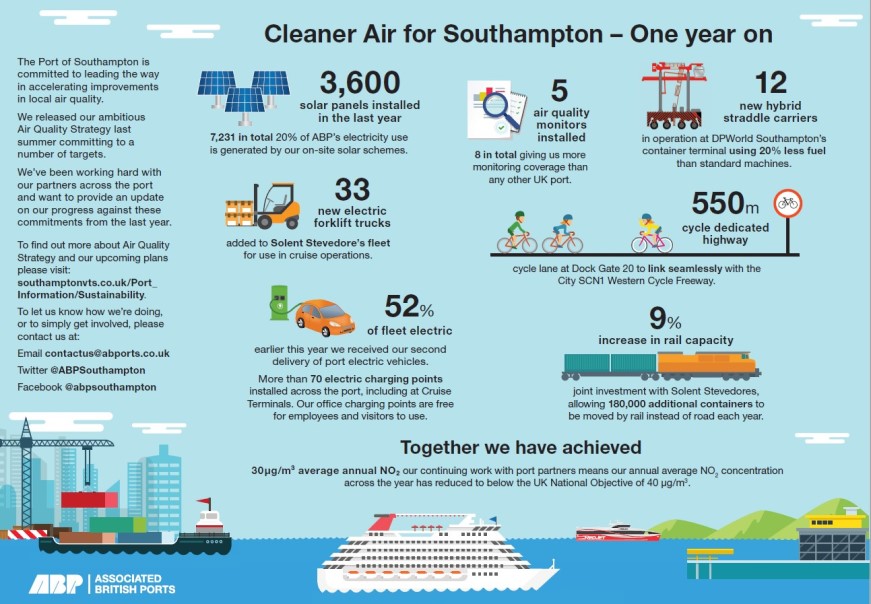 Achievements include increasing the electric vehicle fleet so that the majority of ABP’s vehicles are zero emissions. Solent Stevedores has introduced 33 electric forklifts for cruise operations and DP World has 12 new hybrid straddle carriers at the container port. A partnership project between Solent Stevedores and ABP has also increased rail provisions at the port, reducing the number of lorry movements on the road.

ABP Regional Director for Southampton Alastair Welch said: “We’re pleased to see that the work we have been doing alongside our port partners is accelerating the progress in air quality.

"We recognise there is still work to do and we will continue working with the council, energy providers and partners to ensure we are operating in the most sustainable way possible.

"We look forward to reporting further progress against our commitments in 2020.”

Return to Our Southampton