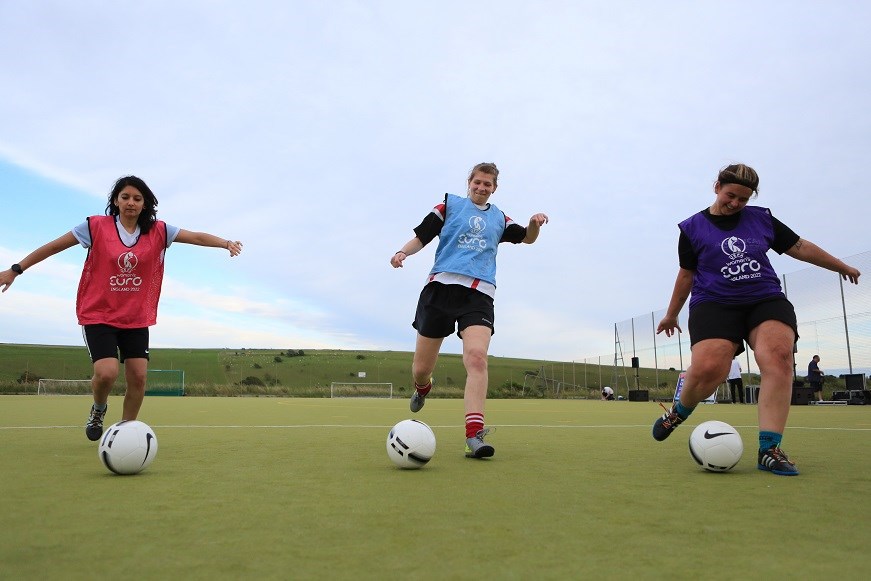 The UEFA Women’s EURO roadshow stops off in Southampton next week as part of a national tour visiting all host cities.

The free roadshow, supported by Southampton City Council, will take place at West Quay Shopping Centre on 18 June. It will provide all visitors with an opportunity to get involved in this summer’s unmissable tournament.

Williams is England’s most capped female player with 172 appearances for the Lionesses. The former midfielder represented England at two UEFA Women’s Euro championships, three FIFA World Cups and the London 2012 Olympics. Reigning Panna champion Pavlou, has travelled the world performing her footballing tricks alongside some of the football’s biggest names including Neymar, Roberto Carlos and Rio Ferdinand.

England Legend, Fara Williams MBE said: “UEFA Women’s EURO 2022 is a huge moment for European football. The tournament will be bigger than anything we’ve seen before and with matches on home soil it’s going to feel even more special. Events like the EURO Roadshows really help bring the tournament to life and give everyone a chance to come together and feel part of it”.

UEFA Women’s EURO 2022 Tournament Director, Chris Bryant said: “We are just weeks away from UEFA Women’s EURO 2022 and what’s set to become a record-breaking tournament for women’s football. With excitement building across the country, we’re delighted to be able to bring the Roadshow to the South Coast and provide lots more young people with an opportunity to experience the women’s game.”

Anyone wanting to get involved in grassroots football and learn more about other routes to get into the sport, will have an opportunity to do so at the Roadshow, with visitors able to try a range of industry related roles such as matchday presenting and interviewing in a special TV studio.

Local entertainment will also be on offer throughout, with DJ’s performing live, along with a host of other exciting acts on the line-up. Fans will also have a chance to have their picture taken with the UEFA Women’s EURO 2022 trophy and win tickets to games at the tournament.

UEFA Women’s EURO 2022 Roadshow will be open from 11am – 5pm on Saturday 18th June at West Quay Shopping Centre. Match tickets for fixtures including games at Saint Mary’s Stadium will also be available for purchase on the day.

Tickets are on sale now for fans to experience a history making tournament that aims to unite football and communities and amplify the growth of the women’s game. Prices start at £10 for adults and £5 for under 16s. Buy tickets online.