At a Special Council Meeting yesterday (Monday 24 January), the Honorary Freedom of the City was awarded to Albert (Bert) Warne in recognition of his continued commitment to ensuring that those who served in the Far East theatre of war are remembered.

Hundreds of thousands of members of the Allied Armed Forces left British ports to serve overseas. Many servicemen, including Bert were destined to endure up to four years in captivity in the Far East.

While several thousand did not return, over 20,000 Far East prisoners of war and civilians returned to Southampton in 1945. Another 17,000 were taken to Liverpool where Bert then took a train back to his family and fiancée.

A memorial stone was installed at the Holy Saviour Church in Bitterne in 2003. While there were 20 personnel at the unveiling, Bert is sadly the last surviving member.

His story of survival is unbelievable and after a unanimous vote, the council felt that the award should be bestowed to recognise the city’s gratitude of how he has looked after and remembered his fellow prisoners of war (POW).

“It is my great privilege to bestow the Honorary Freedom of the City to Mr. Albert Warne. Granting a person the title of Honorary Freeman is the highest honour the city council can bestow upon an individual.

"My colleagues on the council voted unanimously to award this honour on to Albert for his continued commitment to ensuring that those who served in the Far East theatre of war are remembered. Bert is the last remaining prisoner of war who installed the memorial in Bitterne Churchyard in 2003. His own story of survival and his continued work to support prisoners of war is both inspiring and incredible.”

Bert's story was shared with the children and staff of Sholing Junior School and all agreed that his unwavering and unrelenting commitment in the support of returning service personnel, their families and in remembrance of those who had passed had to recognised by the City. In September 2020, the children began writing letters to the council, requesting that Bert receive the Highest Award the City could bestow on a resident in recognition.

“As a school, we are very proud of the children for raising his story with the council and their continued commitment to working closely with the Mayor and the City Council to gain this outcome. We are of course very proud of Bert, and the whole school has learnt how important it is that his kindness, compassion and resilience over the years should be shared and celebrated. We are all delighted that Bert has this recognition and very special award.” 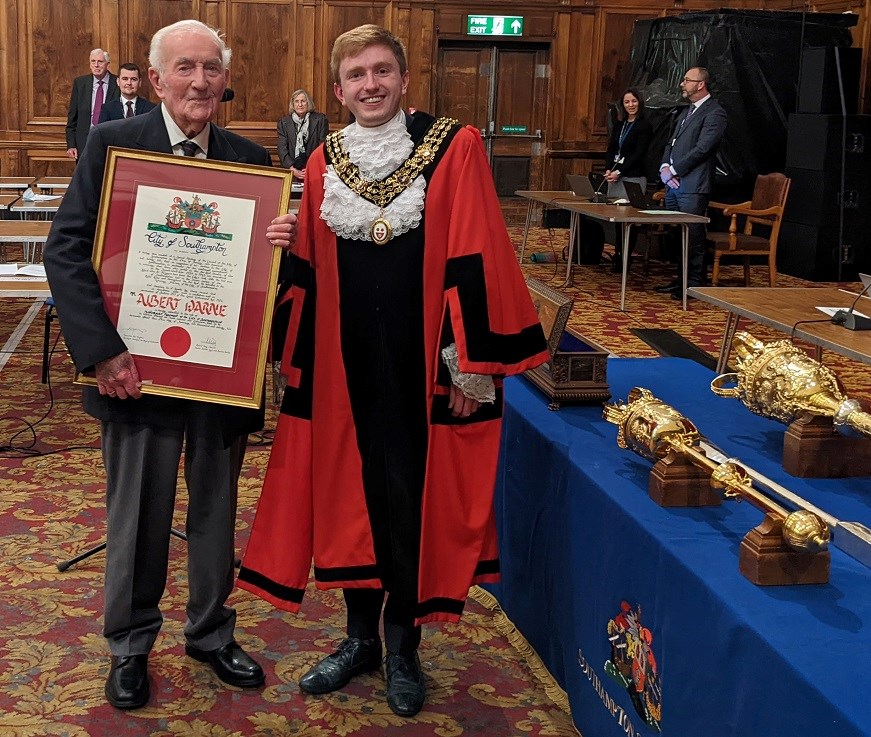