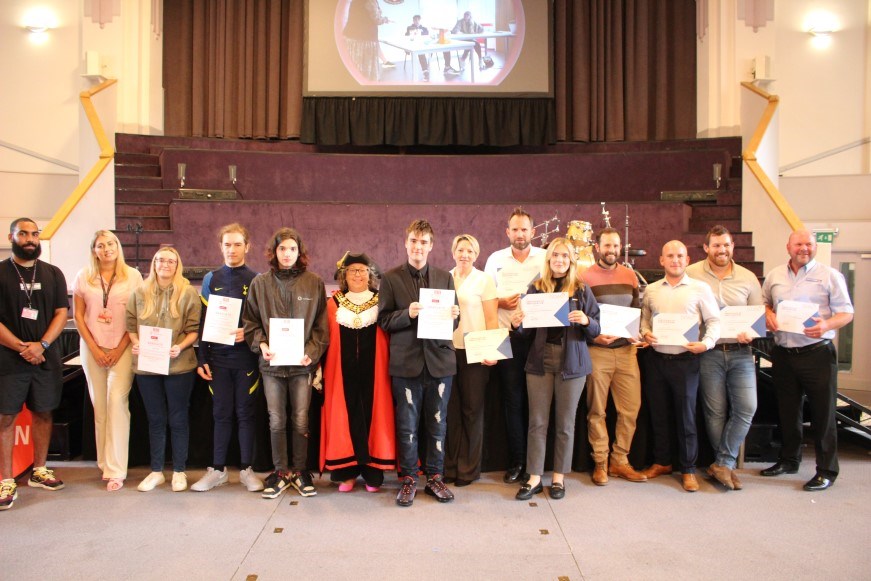 Southampton City Council and Balfour Beatty have just finished an exciting programme working alongside Southampton Football Club’s Saints Foundation and Goal 17 to help transform the lives of young people from the city. The 10-week mentoring and skills training programme drew to a close in a graduation ceremony on Thursday 7 July at Central Hall Conference Centre.

The young people taking part received wellbeing and employability training through the Saints Foundation’s Saints Works programme, alongside one-to-one mentoring from volunteers in the Southampton team from Southampton City Council, Balfour Beatty and their supply chain partners R&W Civil Engineering, Arbus, Roadways and Hailsham. The Mentors took time out from their normal working agendas to train in mentoring skills and to support the young people.

“I didn’t get on very well with college, so this programme really suited me as it’s practical and working on a one-to-one basis with my mentor. Alison has been a real support for me – she’s helped me prepare for job interviews and to communicate better.  Without the programme I wouldn’t be where I am today which I’m happy to say is with a job at Gather and Gather.”

“It’s amazing to see how much Charlie has progressed in just ten weeks. We’ve been focusing on things such as writing his CV, applying for jobs, and improving his interview techniques. I’m so pleased for Charlie; he’s worked hard, and it’s paid off as he now has found employment. Well done Charlie.”

“What a fantastic group of young people. It’s not easy when you don’t have the best start in life. I lived on a council estate in Southampton and found myself to be a single mum. If you’d have said to me 10 years ago that I would become the Lord Mayor of Southampton I never would have believed you. It’s not where you start from in life, it’s the journey that you go on and the people you surround yourself with on that journey. Well done to all the young people and their mentors.”