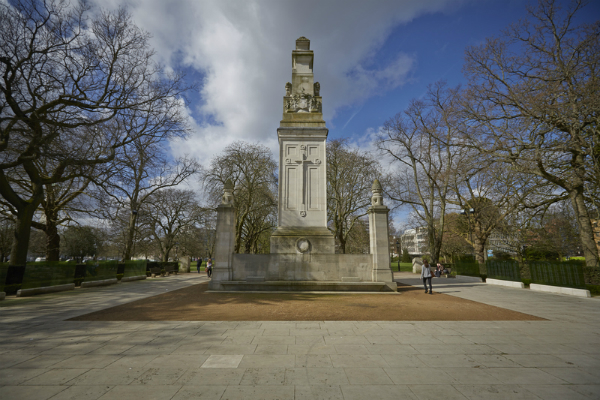 In 1920 the Borough was much smaller than the city is today and at that time it did not incorporate the districts of Bassett, Bitterne, Bitterne Manor, Bitterne Park, Itchen, Midanbury, Millbrook, Peartree Green, Redbridge, Sholing, Swaythling, Thornhill, Weston and Woolston.

Jesus Chapel (Peartree Church) erected its own war memorial in the churchyard in the centre of Peartree Green.

The War Memorial Committee collected 1,793 names and these were inscribed onto the recessed faces of the central pylon of Lutyen’s Cenotaph, ready for the dedication ceremony.

The pamphlet for the dedication ceremony rounded this up to 1,800 names and it is possible they were still collecting names as it went to press.

Adding of additional names to the memorial

In the months following the dedication a number of families came forward asking that their loved ones also be included, but their requests were initially refused. The mother of Arthur Ernest Hayball, who had died when the Merchant Navy vessel SS Antonio was torpedoed, wrote to the Town Clerk only to be told that it was not possible to add any further names.

Mrs Hayball then contacted Norton Catchpole, Secretary of the Hampshire Division of the “Comrades of the Great War”, who took up the case and advertised in the ‘Echo’ for more families to come forward. By 26 April 1921 Catchpole had a list of a further 148 names, which he sent to Alderman Kimber who headed the War Memorial Committee.

As a result of Catchpole’s letters in the ‘Echo’ he was contacted by P.F. Morant, of the long-established Morant Bros. stonemasons on Malmesbury Road, Southampton.

Morant offered to cut the extra names free of charge, on the understanding that it would be done anonymously.

He did not want a “cheap advertisement” and wrote to Catchpole that “I am offering to do this as I am an ex-service man myself and thankful my own name hasn’t to go on there”. He signed the letter, “PF Morant, Late Sapper 26th Field Coy. RE, 1st Division, BEF”.

Despite this offer, when the decision was taken to add the missing names, by then standing at 203, Garret and Haysom, Monumental Masons of East Street, were commissioned.

Their invoice for £26-16-0 shows that the work was completed by 15 November 1921. The recessed panels on the Cenotaph were full and the names overflowed onto the shoulder of the pylon, where the stone was much coarser than that chosen for the panels.

However, this was not quite the final act and, in February 1922, Garret and Haysom were hired again to add the 1,997th and final name - William Henry Thomas Deem.

Repairs to the cenotaph

The weathering of the Cenotaph began to cause concern in the 1990's and the most badly eroded names were recut. The weathered faces had to be dressed back to get a good surface and this left the memorial with a rather patchy appearance.

By the early 2000's it was becoming clear that the weathering was not a general deterioration, but was related to the quality of the stones used.

Some were very resistant to water and frost, others were crumbling rapidly and would need continual recutting to preserve the names.

The crumbling blocks of stone could not be recut in isolation; the whole surface would need to be dressed back to maintain the design of the recessed panels.

Given that the Portland stone bearing the names was just a skin over a brick core continual recutting and redressing would result in eventual replacement of the outer skin, and Lutyen’s Cenotaph would be gone.

The decision was therefore taken to build the Memorial Wall. Two designs, one in stone and one in glass were looked at, and the decision was finally taken to go with the glass wall.

The decision was also taken to add the names of the dead of the Second World War, and those who had died in subsequent conflicts.

The rising interest in genealogy had resulted in a number of families contacting the council during this period with information about other people who did not appear on the Cenotaph, and it was decided to carry out research to ensure that the list of names to be commemorated on the Memorial Wall was as accurate as possible.

For the purposes of collating names to be commemorated on the Memorial Wall the general criterion for inclusion was established as ‘all armed service personnel from the Borough of Southampton killed in action’.

The Royal British Legion and Merchant Navy Association assisted in compiling the Rolls of Honour for the periods 1914—1918 and 1939—1945.

The primary sources for this period were the Cenotaph Roll of Honour held by Southampton City Council Archives, the Commonwealth War Graves Commission database 1914-1921 and The National Roll of the Great War (Southampton Volume).

Names were checked against street directories and the 1911 national census. Members of the public also come forward with names. The total number of Great War names on the Memorial Wall is 2,368 which is 371 names more than in 1922.

The City boundary had been significantly enlarged by 1939 so the outlying areas were included in the Borough by then.

The primary sources for this period were the Civic Book of Remembrance and the Commonwealth War Graves database 1939-1947. Many members of the public presented names.

The total number of World War II names on the Memorial Wall is 927.

It has proved difficult to collect names of service personnel killed in action between 1918—1922, 1922—1939 and after 1945. There are no comprehensive national records for these periods, and individual regiments still hold their own records.

The total number of Additional Conflicts names on the Memorial Wall is three.

The opening of the Memorial Wall generated considerable publicity worldwide and a number of new names have been put forward. These will be checked and added in the future.

If you know of other service personnel who you think should be included, then please get in touch. We will need name, rank, and number, regiment/unit/ship, date of death and evidence that they lived within the borough, or the city after 1964.

Please email details to the Ancient Monuments Officer at archaeology@southampton.gov.uk

Thanks to Jo Smith and Sue Hill of Southampton City Archives for their assistance on this project.