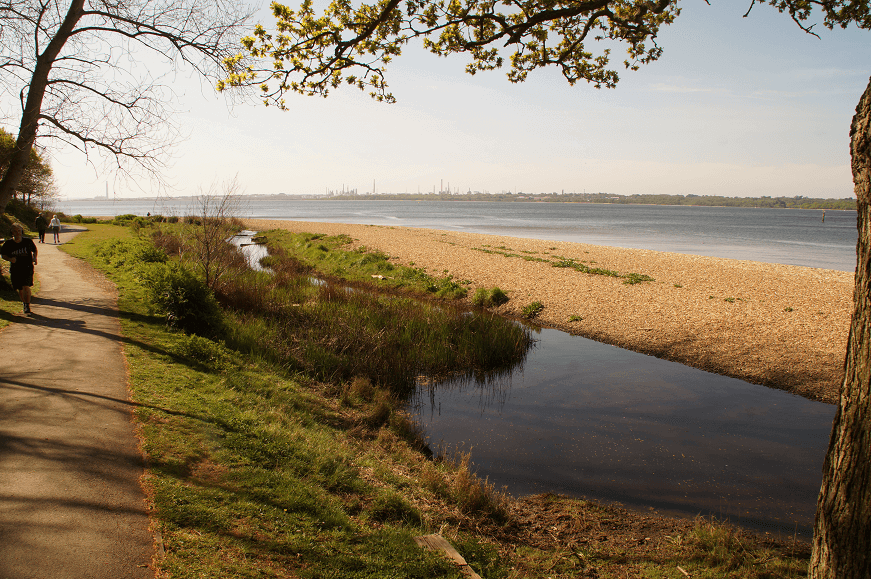 The Community Award winning Weston Shore has many features that make it a unique and interesting place to visit.

Situated on the east side of Southampton, Weston Shore runs alongside the Solent from the city boundary, at Abbey Hill, towards the mouth of the River Itchen, at Woolston.

The shore is a popular location for people across the city as it has direct access to the waterfront and provides views over the Solent. It's a great place to watch the ever changing activities on the water including the comings and goings of large cruise liners.

Along the pebble beach there is a children’s play area and several Art Deco seating shelters along the promenade. The area of amenity grassland east of the slipway is used for a pitch ’n’ putt with a large open area for recreation. This area is known as Rolling Mills as it was once the site of a steel rolling mill but now provides a large open space for games and leisure activities, such a kite flying.

The route along the shore is part of the National Cycle Network.

As one of the few coastal habitats in the city, the Shore is an important and unique site for wildlife. At low tide the mudflats provide an important feeding site for thousands of wetland birds, including oystercatcher, curlew, bar tailed godwit, greenshank and redshank. Many of these birds face arduous migration journeys and can only feed at low tide when the mud flats are exposed. Disturbance from human or dog activity may prevent the birds from accessing the feeding site, so we ask that you avoid walking near the feeding birds and keep your dog on a lead or under close supervision. To prevent further disturbance, the tractor can only be used to clear the slipway between May to September, inclusive.

Weston Shore beach and foreshore was designated a Site of Special Scientific Interest (SSSI) in 1992, as part of the Lee-on-Solent to Itchen Estuary SSSI. Subsequently these areas were included in the Solent and Southampton Water Special Protection Area (SPA) and the Solent and Southampton Water Ramsar Site (SCC, 2010). Most of the grassland and woodland remainder of the area covered by this survey is a Site of Importance for Nature Conservation (SINC) (SCC, 2010).

In 2015, The Friends of Weston Shore commissioned local ecologist, Phil Budd, to carry out a species survey of the shore. They have kindly agreed to share the species lists.